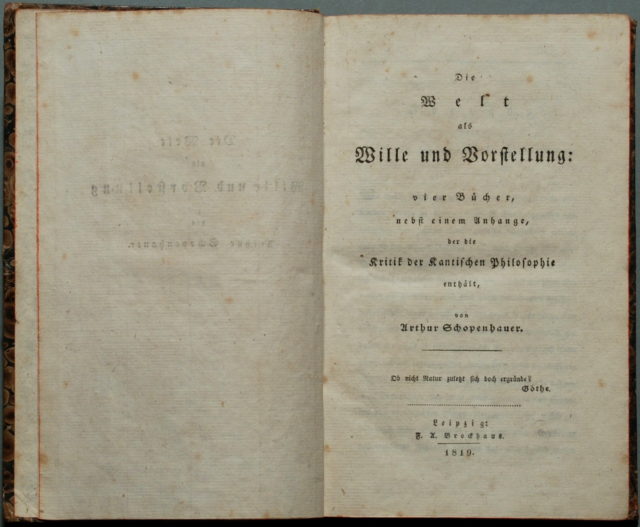 In this paper, I focus on Schopenhauer’s account of agency. I propose a distinction between a narrow and a broader account. According to the former, Schopenhauer emphasizes the extent to which our actions are fully determined by our cognition of motives and our character, leaving only a negative role for freedom. The broader account, on the other hand, reveals a very different picture of Schopenhauer’s account of agency, one that is characterized by his emphasis not only on a positive sense of freedom but also on action as an expression of existential cognition and insight.

Keywords: Schopenhauer, Agency, Will, Freedom, Affirmation and Negation of the Will, Existentialism.

This contribution tracks a path through Scheler’s concept of “impotence of spirit” in order to highlight its roots in XIX century philosophy, with particular reference to Schopenhauer’s thought. In analyzing Scheler’s philosophical anthropology, deep roots in Schopenhauer’s and Hartmann’s philosophy emerge, which give a great impulse to Scheler’s work, in particular for what concerns the “fight” against nihilism and the attempt to find a trace of sense in the non-sense of the contemporary world.

Schopenhauer and Bonaventura da Bagnoregio, two philosophers who are distant in time and thought, both focus their reflections on the concept of ascesis. Their positions relative to this concept differ, in part due to the theoretical systems that motivate the thought paths of both philosophers. It is therefore interesting to offer an in-depth comparison between the conceptions of ascesis that arise from the two different ways of understanding reality. Thus one can grasp the deep motivations that push the two authors to concentrate on defining such an extreme concept of philosophy, such as that of ascesis. The result of such a reflection leads us to note the peculiarity of the will to raise in Bonaventure’s ascesis, while in Schopenhauer there is an ascesis that turns out to be the only tool for the negation of the world. However, beyond the differences that they go on to make explicit, the most interesting point of convergence is how the concept of ascesis can indicate a way of living the philosophical research that unites apparently distant paths.

2019 was the bicentenary of both The World as Will and Representation and of Leopardi’s poem The Infinite. One of Schopenhauer’s great intuitions is the relative nothingness, which goes beyond and is distinct from any commonplace account of pessimism or nihilism. Leopardi also makes room for a positive nothingness which contrasts with a negative nothingness. On this basis, a revealing parallel can be drawn between Schopenhauer and Leopardi, whom the former appreciated more as a philosopher than a poet. In view of this new comparison, contemporary thought is
brought out more clearly. In this context the principle of reason is questioned, when at the same time one’s grasp on existence collapses into the abyss, sailing straight towards
shipwreck. A shipwreck which – metaphorically – is the undoing of absolute nothingness: this much is clear from the last line of The Infinite, as much as from the last page of The World.

This paper intends to highlight the dimension of the “tragic” in Schopenhauer’s thought. Thus it will be necessary to pass through the so called “critic of the transcendental philosophy” because here it is already possible to notice some symptoms of the tragical dimension. The critique will be addressed in particular towards the category of causality which will permit the temporal dimension to emerge in its existential significance over the gnoseological relationship between subject and object. The aim of this course is to highlight the “environmentality” of consciousness as it was foreseen by Schopenhauer in all its contradictory and “tragic” nature.

The significance of Schopenhauer for Wittgenstein is quite well known. Nevertheless, the influence of The World as Will and Representation on Wittgenstein’s Nachlass is worth studying in detail to value the secondary literature recently published on this theme and to determine if (and to what extent) Schopenhauer’s thought is present in analytic philosophy thanks to Wittgenstein. To this end, I will identify the most relevant Schopenhauerian themes attested in the Tractutus and in the Philosophical Investigations (in particular solipsism and representation) which, through Allan Janik, Iris Murdoch and Hans-Johann Glock are present in the current debates. I will conclude that Wittgenstein’s intellectual debt with regard to Schopenhauer is great, but not sufficient in order to transfer it as a heritage to analytic philosophers.

Meet the Educator – Is Schopenhauer One?

The aim of this paper will be to show in what way Nietzsche’s reading of Schopenhauer’s philosophy of education can shed some more light on education and teaching. Following the two hundredth anniversary of the publication of his most prominent work The World as Will and Representation, Schopenhauer was chosen to be the focus of this work. Here, we will not only try to outline his thoughts regarding the philosophy of education, but will also try to compare and parallel him to the more contemporary philosopher of education, John Dewey. We hope to outline that some of Schopenhauer’s philosophy of education is quite similar to that of Dewey, especially when tackling the questions of critical thinking, individual self-reflection, thinking for oneself etc. What stands to be of the utmost importance is the fact that Schopenhauer’s outlook on education might not be so different from his predecessor Kierkegaard, or of those who came after him, for example, Dewey, Whitehead and Frankena. The primary focus here is to display and support Schopenhauer’s perspective on upbringing, to present it as not that much different from existentialist philosophers’ outlook in general. Hence, we will discuss some of the most important topics found in his educational approach, but also touch upon the notion of authority as the one that primarily lies with the teacher, and draw some lines of similarity between his views and the sobering reality of today.

Speculation and Esotericism in Schopenhauer’s Philosophy

This paper considers the question of the speculative nature of Schopenhauer’s philosophy. In order to illuminate this issue, aspects of his conception of the aims and methods of philosophy will be investigated, with a particular focus upon the extent to which his system lies within the philosophical esoteric tradition. It will be argued that Schopenhauer’s works recognisably stand in the tradition of pedagogical esotericism, involving engagement in reflection that at least touches upon the mystical and speculative.

This paper aims to investigate the Schopenhauerian dilemma between faith and philosophy, as examined in Schopenhauer’s works. As is well known, this dilemma is often simplified into two main perspectives which apply to general solutions: the first that closes the relationship between faith and philosophy in a coincidence of those two terms; and the second that highlights a perennial struggle between them as if they were in an eternal fight the aim of which is to achieve a better position in the field of knowledge. The approach given by Schopenhauer to the problem gives us the opportunity to read once again this dilemma and to find a way towards a renewed sense of the Schopenhauerian concept of “ascesis” intended both in its philosophical and
religious sense.

Schopenhauer’s Early Manuscripts reveal that the “single thought”, which would be presented in a more systematic way in The World as Will and Representation, already existed in all its complexity before 1814. In the Early Manuscripts the tension between empirical and better consciousness is also understood as a tension present inside the will, as a polarization between the “will-to-live” (or “worst will”) and the “better will”. The final target of the “better consciousness” and the “better will” is the negation of the world, which is to say liberation from the world. In Schopenhauer’s masterpiece, liberation from the world will also involve the negation of both ideas and will. Therefore, the aim of this paper is to investigate the evolution of the concept of “will”, from the Early Manuscripts to the elaboration of the “single thought” as presented in The World.

Schopenhauer on Sympathy: Ground of Compassion, Sexual Love and Magic

Chapter 47 of WW2 closes with a remarkable paragraph where Schopenhauer claims that three distinct phenomena, compassion, sexual love, and magic, can be brought under «the common concept of sympathy» and that «sympathy is to be defined as the empirical emergence (Hervortreten) of the metaphysical identity of the will through the physical multiplicity of its appearances». What is intriguing about this claim is the seeming exclusivity of just these three phenomena because, in line with Schopenhauer’s general philosophy, all empirical phenomena whatsoever are manifestations or objectifications of will and can therefore be said to be in some way instances of the “empirical emergence” of the metaphysical will. This paper investigates the
distinguishing features of compassion, sexual love, and magic, which are absent, at least to some degree, in other phenomena. I suggest that their common distinguishing feature is a feeling of mystery. This feeling of mystery arises from the fact that some salient features of empirical compassion, sexual love, and magic are unexplainable by ordinary means because, Schopenhauer argues, they display «a connectedness that is entirely different from the connections mediated by the forms of appearance, which we conceive under the principle of sufficient reason».