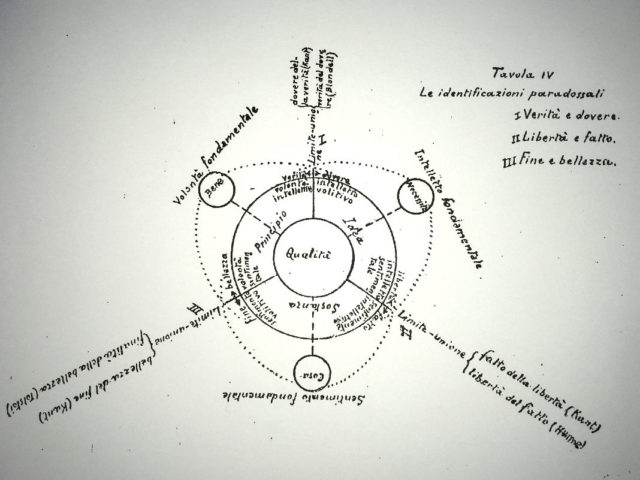 Pantaleo Carabellese an Archaic Philosopher? A Conference Day about his Philosophy.
The essay reconstructs the motivations that drove the Universities of Bari and Perugia, thanks also to the support of Bari’s section of Italian Philosophical Society, to organize a conference day dedicated to Pantaleo Carabellese on the 70th anniversary of his death. These motivations are closely linked to point out the original contribution given by Carabellese to 20th century’s Italian philosophical reflection. This happened in a theoretical perspective that, as Giuseppe Semerari affirmed, represented the Italian viewpoint of that “Refoundation of Ontology” which had as its counterpart in Europe philosophers such as Husserl, Heidegger e Sartre, and displayed, as well emphasized by Edoardo Mirri, a recovery of the theological question as a fundamental matter in philosophy, in an epoch when it was to

The Theme of an Ascetical Philosophy in Pantaleo Carabellese
Pantaleo Carabellese develops an approach to philosophy emphasizing the exclusively speculative motive: philosophy is pursued in its purity, it is worthy of being exercised because it has no other motives but the high motive of thinking. It is a clearly metaphysical address, all aimed at the search for the manifestation of truth; he believes that it is necessary to look for the theological horizon of thought, so inevitably the research is oriented towards transcendence. An interpretative approach addressed to Carabellese is the one that underlines the ascetic motif of his philosophy, this orientation starts from Moretti-Costanzi and then develops further in depth and rich in originality also in E. Mirri and F. Valori.

Being and Ascesis of Consciousness. Mirri between Carabellese and Moretti-Costanzi
In this contribution will be tracked the trace of thought which has been developed by Edoardo Mirri on the wave of Carabellese’s philosophy. The aim is to highlight the interpretation given by Mirri of the critical ontologism proposed by Carabellese in the horizon of what can be called the neo-bonaventurian school, raised under the impulse of the Carabellese’s scholar Moretti-Costanzi.

Giuseppe Semerari Interpreter of Pantaleo Carabellese
The following pages reconstruct the relationship that linked Giuseppe Semerari and Pantaleo Carabellese, focusing on three essential points: the political conception of Carabellese – interpreted in his socialist, laic heritage, inspired by his fellow citizen Salvemini – which determined the first approach of the young Semerari to his Master; the convinced interpretation of Semerari that inserts critical ontologism within the framework of Italian neo-kantism and the rebirth of ontology of the first half of the twentieth Century; the past/present link in philosophy, which, in both the Authors, overcomes the doldrums of the historiography and historicism of Croce and Gentile and tends towards an authentic “dialogue” with the thinkers of the past.

Teaching Philosophy between Carabellese and Semerari
The essay develops the comparison between Carabellese and his pupil Semerari for what concerns one of the most relevant question in the didactics of philosophy, analysing the ideas of the two thinkers about teaching philosophy, the finality of teaching, the relationship between philosophy and history of philosophy, the methodologies of the didactics of philosophy and the relationship between teacher and pupils. Semerari borrowed from his master a deep awareness for the problems involved in teaching philosophy, nonetheless many ground convictions (such as the opposition against every kind of absolute historicism and dogmatism), but he has also developed autonomous ideas and different courses, always in an ideal confrontation with his master, until the last years of his scientific and academic career.

Beyond Carabellese and Semerari. Some Remarks on the Didactics of Philosophy Today
The contribution contextualizes the debate on the teaching of philosophy, characterized by the comparison between models of historiography and the teaching of philosophy, from the Marxist and idealist, substantially historicist, up to the phenomenological/ontological one. We then compare ourselves to the current positions, which emerge from a recent ministerial document with a strong analytical imprint and which try to combine philosophical expertise according to a monocratic model of reason, to which the philosophical reason is assimilated tout court. Starting from some happy didactic practices, such as the centrality of the text, on which some competences of textual exegesis seem to be effectively verifiable, to the style of philosophising taking a stand against the philosophical reductionism of those who mean to extend the practice of philosophical questioning over the bed of Procruste of the debate and of critical thinking

Italy as Philosophical Problem. Meditations on Disaster in Carabellese’s Political Theism
The essay focuses on the political thought of Carabellese and in particular to his work L’idea politica d’italia (1946), in which he organises his political ideas in the light of the critical ontologism. In a tragic and complicated period of the Italian history, Carabellese faces the philosophical and political problem in a speculative rather than empirical way. In particular he underlines as the national “personality” of Italy, despite that of other nations, didn’t divert from the path of the “universal objectivity” and, for this reason, it can and must assume a central role in the universal resurgence. Even if focused on the centrality of Italy the patriotism of Carabellese doesn’t fall into chauvinism.

Theoretical Elements of Carabellese’s Critical Ontologism as a Foundation of a Philosophical Engagement
In this article we review some key points of Carabellese speculation. These concepts are recognized as common and preliminary elements and assumptions, useful to sharing theoretical perspectives in the different speculative sensibilities typical of the Carabellesian school. In particular the concept of the “concrete”, of “ontologism”, of “criticism” and “ascesis of conscience”. Ultimately it is a matter of rediscovering a common program of renewed study on the essence of philosophy in fidelity to the thought of Pantaleo Carabellese.

The I-Other Relationship in Pantaleo Carabellese
We examine here the relation that can be glimpsed, à propos the conception of the Iother relation, between Pantaleo Carabellese and Emmanuel Levinas, taking into account Giuseppe Semerari’s interpretation of Carbellese’s works. Levinas’s conception of intersubjectivity can be associated to Carabellese’s largely thanks to recognition that otherness is not denial of the I or what the I denies. The Other is not an empirical subject, and the otherness cannot be assimilated to the quality of an object. If this were the case, the otherness would not be expression, it would not have a sense in itself, but would be an object for that subject of which and for which it is other.

With Carabellese, over Carabellese: the Role of Critical Ontologism in G. Semerari’s Philosophy
This paper shows how the role of the philosophy of Pantaleo Carabellese is fundamental and constant in the thought of Giuseppe Semerari. Indeed, Carabellese crosses the whole thought of Semerari, since Semerari’s first essays of the Forties to the production of the end of the late Eighties. In particular, this essay tries to show how, starting from Carabellese’s critical ontologism, Semerari identifies the question of the relation as the interweaving point between the ontology of becoming, the transcendentalist instance, and the question of responsibility.

Pantaleo Carabellese and the Problem of Philosophy in Contemporary thought
This contribution faces the debate lead by Carabellese in the context of contemporary philosophy by underlining the contribution given by the critical ontologism to the main themes of contemporary thought, such as the ontological difference, the temporality and the concreteness of thinking. The being of consciousness is here investigated in its two distincts, otherwise God, intended as the “Pure Object”, and the multiple subjectivities, by highlighting the aporias concerning those two elements of thought also in relationship with the ontological argument.

From Onto-theo-logy towards the Ontological Argument: Heidegger, Carabellese, Moretti-Costanzi
The essay puts into dialogue the concepts of Heidegger, Carabellese and Moretti- Costanzi about the essence of philosophy. The starting point of the reflection consists of how Heidegger understands metaphysics as onto-theo-logy. This beginning of the argumentation allows to frame how Carabellese himself is capable of surpass the Heideggerian ontological difference through the identification of philosophy and theology in their interrogative essence. Indeed, in the unum argumentum Anselmi, Carabellese can support the thesis which identifies the theological problem as pure and authentic philosophy. Thanks to a reconsideration of Carabellese’s thought, Moretti- Costanzi radicalizes the intuition about the ontological argument and relaunches the topic about the essence of philosophy in order to the necessity of the ascesis of consciousness of the one seeking after wisdom with love.